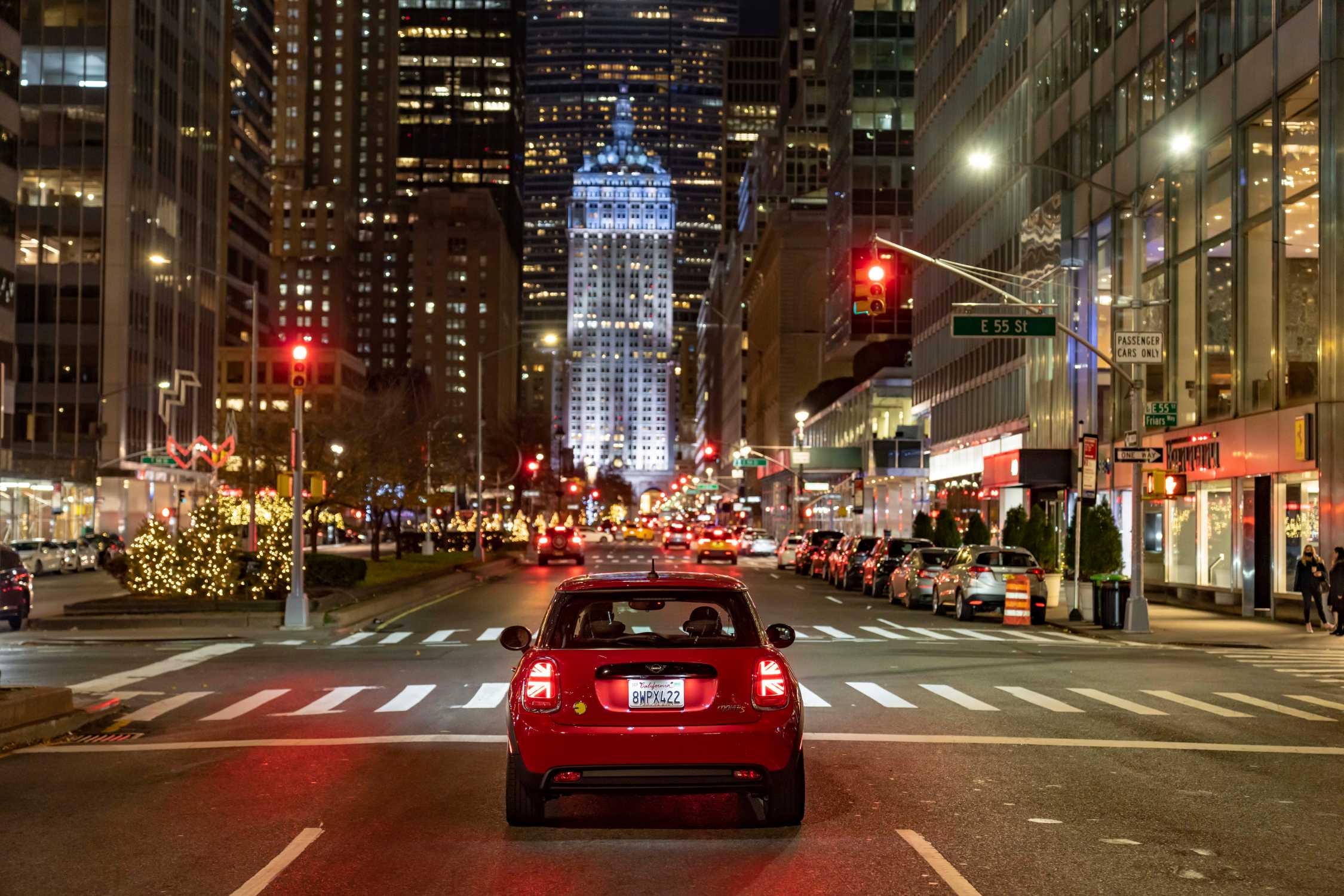 Countless colourful lights, a sparkling atmosphere, imaginative decorations in the department stores and creatively decorated residential districts make a pre-Christmas visit to the "Big Apple" an unforgettable experience. The tour through the illuminated canyons of the city in the all-electric...

www.press.bmwgroup.com
Countless colourful lights, a sparkling atmosphere, imaginative decorations in the department stores and creatively decorated residential districts make a pre-Christmas visit to the "Big Apple" an unforgettable experience. The tour through the illuminated canyons of the city in the all-electric MINI Cooper SE is particularly festive when, with a bit of luck, its already quiet ride is also dampened by snow.

Munich. Everyone who visits New York City for the first time has one big problem: Where to start in the metropolis of eight million? The city covers more than 1 200 square kilometres, is one of the most important trading centres in the world and offers a colourful selection of around 500 galleries, more than 200 museums, about 150 theatres as well as no less than 18 000 restaurants. The answer is easier if you choose to visit during the Christmas season: Manhattan. Because probably nowhere else in the world is the time before the holidays celebrated as much as there, where millions of lights enchant the city already at the beginning of December. The more than luxuriant sea of lights is a tradition, just like the streets packed with street cruisers, yellow taxis, stretch limousines and pick-ups. The sightseeing tour in the all-electric MINI Cooper SE (power consumption combined: 17.6 - 15.2 kWh/100 km according to WLTP, 16.9 - 14.9 kWh/100 km according to NEDC, CO2 emissions combined: 0 g/km) creates a relaxing contrast. Virtually silent and locally emission-free, the MINI Electric offers a glimpse of the urban mobility of the future all on its own in New York.

Even in Manhattan, the MINI Cooper SE moves cleverly between sporty temperament and stylish restraint. Its 135 kW/184 hp electric motor accelerates it to 60 km/h in just 3.9 seconds at traffic lights. Sustained driving pleasure is thus guaranteed. And wherever things are a little quieter, pedestrians and cyclists are alerted to its approach by a drive sound specially developed for the MINI Electric and broadcast via exterior loudspeakers at low speed.

An ideal starting point for the somewhat different city tour is Central Park - and there the famous ice rink in the southern part of the green space. Wollman Rink has been the backdrop for many Hollywood films such as Love Story and is as popular with New Yorkers as it is with tourists. It is an experience to be on the ice amidst the skyscrapers with a view of the Christmas skyline of Manhattan and then to explore the wintry park on foot.

A visit to New York in December naturally includes extensive Christmas shopping. The city is decorated everywhere, the shop windows glitter, tell stories and make the eyes light up. The Macy's department stores' (151 West 34th Street) is particularly splendid. There, not only the beautifully decorated shop windows, but above all Santa Claus himself awaits visitors young and old. In the famous Santa Land on Macy's eighth floor, everyone can make their Christmas wishes.

Via the famous 5th Avenue and West 59th Street, we then go directly to Columbus Circle. The Christmas market there is one of the most atmospheric in New York. The shops in the southwest corner of the park are colourfully lit. Twelve stars more than four metres high hang from the 30-metre-high ceiling of the Time Warner Center. The light show "Under the Stars" is a real New York tradition. The Christmas market on Union Square, on the other hand, is almost European, where numerous New York artists and craftsmen show their talent and creativity amidst stalls with food, drinks and sweets.

On the way to more shopping hotspots, the MINI Electric rolls along The Plaza at the intersection of 5th Avenue and East 59th Street. The hotel with the imposing French-style façade has served as a hostel for wealthy and famous guests for more than 100 years. Nearly 30 years ago, it was one of the locations of the successful cinema comedy "Kevin - Alone in New York". Donald Trump, then owner of The Plaza, plays a small supporting role in it.

Whether you're a parent, grandparent or godmother, if you have a wish list written by a child in your pocket on your New York tour, you'll inevitably be drawn to the FAO Schwarz toy shop. Once the largest toy shop in the world, it was located on 5th Avenue until 2015 and reopened in Rockefeller Plaza in 2018. Much of the old charm remains, including the "Big Piano" on the floor, made famous by Tom Hanks' dance in the film "Big". The assortment is huge, and some people buy more than will eventually fit under the Christmas tree. There is plenty of room for this in the luggage compartment of the MINI Cooper SE. It can be expanded from 211 to 731 litres. Thanks to the high-voltage battery located deep in the vehicle floor, the MINI Electric offers exactly the same stowage volume as the conventionally powered MINI 3-door.

Close to the New York's Toy Paradise, at 1260 6th Avenue, there is Radio City Music Hall. This is where the world-famous Radio City Christmas Spectacular is performed, one of the most iconic Christmas shows in New York. It includes everything that belongs to the great celebration: from Father Christmas to the Nutcracker to the birth of Christ. And right next door at Rockefeller Center is probably the most famous Christmas tree in the world. This year it is a 25-metre tall spruce from the state of Maryland. On its top sits a large star, designed by star designer Daniel Libeskind. More than 50,000 coloured lights illuminate the tree.

At this sight, hardly anyone might think of the associated electricity bill. But after all, not everything that is fun can be as efficient as a MINI Electric. Its motor works very frugally, and in addition, electricity can be fed back into the high-voltage battery again and again during the drive in push and braking phases. The driver can individually determine the intensity of the braking energy recuperation via a toggle switch. The higher of the two recuperation modes ensures a particularly strong expression of the characteristic one-pedal feeling. When the accelerator pedal is released, electricity is fed back into the high-voltage battery and the vehicle is braked at the same time.

What's more, the LED headlights and LED rear lights in the characteristic Union Jack design also require very little energy. The same applies to the MINI Cooper SE's automatic climate control. Its interior is heated with the aid of a heat pump that absorbs waste heat from the engine, the drive control unit and the high-voltage battery as well as from the outside air and uses it to generate cosy temperatures. It is characterised by particularly favourable efficiency and uses up to 75 percent less energy than a conventional electric heating system while providing a high level of climate comfort in winter operation.

A fitting end to the pre-Christmas sightseeing tour is a visit to the newest observation deck in New York: The Summit One Vanderbilt (45 E 42nd Street). It is located very close to Bryant Park and Grand Central Station and has been open to guests since October 2021. From a height of 427 metres, there is a wonderful view of the nearby Empire State Building, the East River and Central Park. Speaking of the Empire State Building, the music-to-light show there is worth seeing. The already impressive illumination of the Empire State Building is synchronised every night to songs by stars - and at Christmas you can expect some particularly festive music.

Written By:
MiniFootPrint
Follow View All Authors
0 Replies
1 - 1 of 1 Posts

About this Article
0 likes
0 Replies
Written By: