Charge up for a road trip: From Los Angeles to Las Vegas in the MINI Electric.

Jump to Latest
MiniFootPrint
Has anyone taken their Mini SE on long road trip like this? 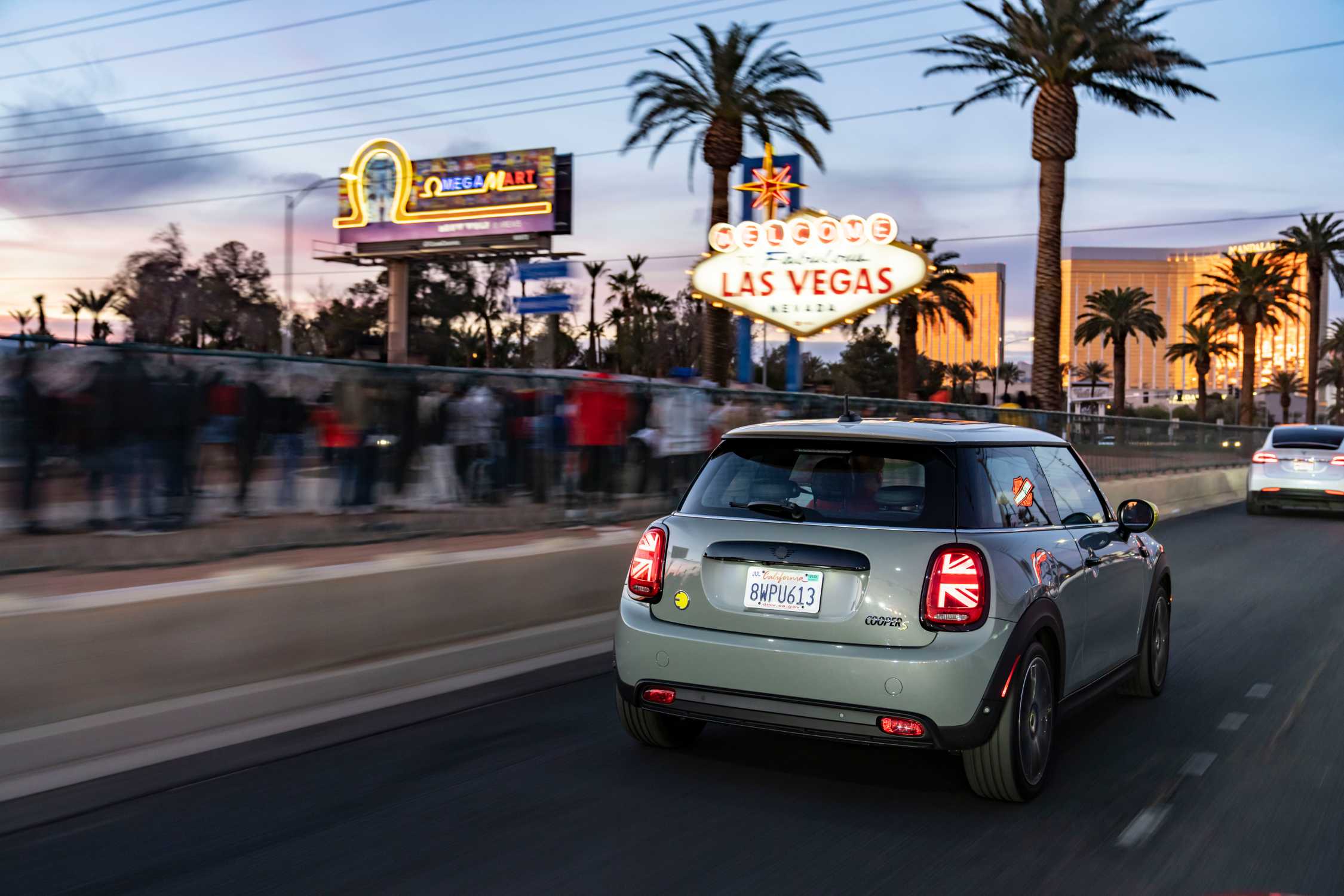 Charge up for a road trip: From Los Angeles to Las Vegas in the MINI Electric.

450 kilometres of stunning landscapes lie between Santa Monica's white beach west of Los Angeles and the neon-lit Las Vegas strip. The perfect route for experiencing the legendary go-kart feeling in the all-electric MINI Cooper SE - not least thanks to a convenient road network with fast chargers.

www.press.bmwgroup.com
Charge up for a road trip: From Los Angeles to Las Vegas in the MINI Electric.
07.09.2022 PRESS RELEASE


450 kilometres of stunning landscapes lie between Santa Monica's white beach west of Los Angeles and the neon-lit Las Vegas strip. The perfect route for experiencing the legendary go-kart feeling in the all-electric MINI Cooper SE - not least thanks to a convenient road network with fast chargers.

On the route through the green mountain landscape around Mount Baldy, the MINI Electric can really strut its stuff. While down in the valley the traffic of the metropolis almost comes to a standstill during rush hour, the MINI Cooper SE is simply a joy to drive as it corners smoothly, hugging the rode also thanks to the lithium-ion high-voltage battery (32.6 kWh gross value) installed in the floor.

The brake energy regeneration system, which can be set in two stages, decelerates the car with strong energy recuperation as soon as the driver takes his foot off the accelerator in the bends. This not only makes it easy on the brakes, but also charges the battery of the all-electric MINI Cooper SE while you are driving.

Speeding towards the Mojave Desert.
After almost two hours, the green of the mountains has meanwhile given way to the fascinating red and brown tones of the first desert foothills and it's time for a restorative break with Mexican tacos in Victorville. In the shade of the palm trees, the MINI Cooper SE can also be charged to 80 percent battery power in just 35 minutes at one of the fast chargers for the upcoming leg towards the Mojave Desert.

In the 113,300 square kilometre Mojave Desert, temperatures average 45 °C in July and August. A very welcome refreshing option on the MINI Cooper SE is its pre-conditioning feature, which can be activated from the restaurant table using the MINI Connected remote app. This allows you to pre-cool the car’s interior. The next 150 km lead deeper and deeper into the vast, barren landscape to Baker. The small town is right in the middle of the Mojave Desert and at the southern end of the route to Death Valley National Park, one of the hottest areas in the USA.

To keep an eye on the record temperatures here at all times, Baker is home to the world's highest thermometer at 134 feet and refers to the highest temperature measured on site of 134 ° Fahrenheit, which corresponds to 57 °C. You simply can’t miss it on and it also reliably points the way to another fast charger stop. In a place like this they they naturally get their sustainable energy from solar panels, which also serve as a welcome sunshade when you plug in the charging cable.

Pleasant temperatures in the hottest place in the USA.
As we drive on, the highway gives us a view of the majestic mountain ranges of the Mescal Range after a few kilometres. The MINI Cooper SE was not designed exclusively for such extreme temperatures as here, but it stands up to the heat test with aplomb. The high-voltage battery remains cool, as does the interior, and the battery power drops only very gradually. The reason for this is a highly effective overall cooling system that acts particularly efficiently thanks to the integrated heat pump technology.

Beyond the mountains, Interstate 15 leads straight to Paradise on the last 80 kilometres, the town immediately south of Las Vegas. Stopping at the imposing Allegiant Stadium, home of the three-time Super Bowl winning Las Vegas Raiders football team, the MINI Cooper SE can be charged with the Flexible Fast Charger charging cable for the relaxed cruise to Las Vegas.

When night falls, no navigation system is needed to find your way to the legendary "strip". Sparkling facades, a sea of neon lights and the legendary "Welcome to Fabulous Las Vegas" sign reliably show where the nightlife is raging. Since it first opened, the 6.8-kilometre-long boulevard has attracted numerous show stars from Elvis Presley to Britney Spears, Elton John and Lady Gaga. Between the perfect replicas of the Eiffel Tower in Paris, the Egyptian pyramids and Venetian canals, the electric MINI Cooper SE finds its way almost silently to the well-deserved hotel check-in at the end of this tour.

Written By:
MiniFootPrint
Follow View All Authors
0 Replies
1 - 1 of 1 Posts
About this Article
0 likes
0 Replies
Written By: